“Perpetuating the Noble Principles for which They Fought and Died”

The name of the organization comes from the tradition of hanging a banner or Service Flag in the window of a home of families of servicemen. The flag would show a star for each family member in the U.S. Armed Forces serving in war. A blue star represented living military service members; a gold star represented those who had lost their life in battle. 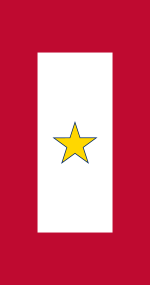 Membership in this socially active non political organization is open to any American woman who has lost a son or daughter in service to the United States in the Armed Forces. God Star Mother’s Day is observed in America in their honor.

You can learn more about their organization here.

Every American should remember with gratitude and honor, the lives of those who have made the ultimate sacrifice for our great nation. This weekend make sure to remember and honor the mothers of our fallen warriors.